It's no secret that Dyson's vacuums are 'the business' when it comes to design, portability and performance.

With the new Dyson Cyclone V10 cord-free vacuum, the company has taken its flagship product back to the drawing board, re-thinking its form factor and refining its cyclone technology to achieve stronger suction than ever before.

How confident is Dyson in its V10 cord-free vacuum? It's so convinced by the device's sucking prowess that it's completely stopped developing corded vacuums going forward.

That's a pretty big call when you consider how many corded vacuums it still sells, which at the top includes models like the impressive Dyson Cinetic Big Ball.

That said, this new stick vacuum isn't cheap — You'll be able to pick up the Cyclone V10 in a few different variations, depending on where you're situated: the US and Australia get the deluxe Absolute+ model that comes with a complete set of attachments (and a nifty orange extension tube). That's priced at $699 (AU$999).

In the UK, the deluxe model with six extra tools is called the Dyson Cyclone V10 Total Clean, and has a red extension tube and cyclones. That's priced at £499.99.

Finally, the US also has an entry-level model in the Dyson Cyclone V10 Motorhead, which shares the V10 Total Clean's red trimmings but comes with fewer attachments. That model is priced at $499 — the same price point that the Dyson V8 launched with.

Along with its technological advancements, the Dyson Cyclone V10 sports a number of other improvements which just make sense.

The first thing you'll notice is that its various sections are positioned in completely different manner to previous V-series models.

For instance, the V10 features a front-facing barrel, which all attachments now connect to directly.

Behind the barrel sits the device's expanded cyclone array (with 14 chambers in total), followed by the new V10 digital motor — the smallest, and smartest, the company has ever engineered.

In fact, it's said to be so intelligent, that it can detect variables like altitude, air pressure and temperature in order to adjust itself accordingly for increased efficiency. Dyson says it even knows the difference between a table and a floor.

At the very back end, you'll find the V10's filter, which you can now remove with one simple counter-clockwise twisting motion, making it easier to clean. An LED indicator on the base of the unit will let you know when it's time for a wash, too.

Once again, Dyson's filter is said to be capable of capturing 99.97% of allergens in the air — even ones as small as 0.3 microns in size will not be able to escape the V10.

With all of the various elements of the vacuum now arranged in an in-line format, the V10 achieves a more direct air-flow path than any of its predecessors, which the company says allows for much greater suction efficiency.

The V10 also boasts a 40% larger bin capacity than the V8, with a redesigned 'point and shoot' emptying mechanism that makes it so much easier to transfer dust and rubbish directly into a trash receptacle or plastic bag.

The one downside to having a front-facing bin is that you'll now have to remove any attachments whenever you want to empty the device — although chances are you were already doing that anyway and never realized.

Opening the bin is as simple as pushing down the red release valve under the unit, which slides the whole bin down in the process and expels any contents within. Admittedly, this plastic flap feels a little delicate, so we're hoping that it stands up to repeated use.

A flexible rubber lip on the inside of the bin prevents almost all dust and debris from getting into the back of the bin, but we've found that even when dirt does slip past, it still get pushed out during the emptying process.

Following the trend it started with the V8, Dyson has banished attachment release buttons from the V10, opting to place them on the accessories themselves.

This makes it much easier to detach vacuum heads and extension tubes in one swift movement, though it does mean that all accessories released prior to the V8 will be incompatible. 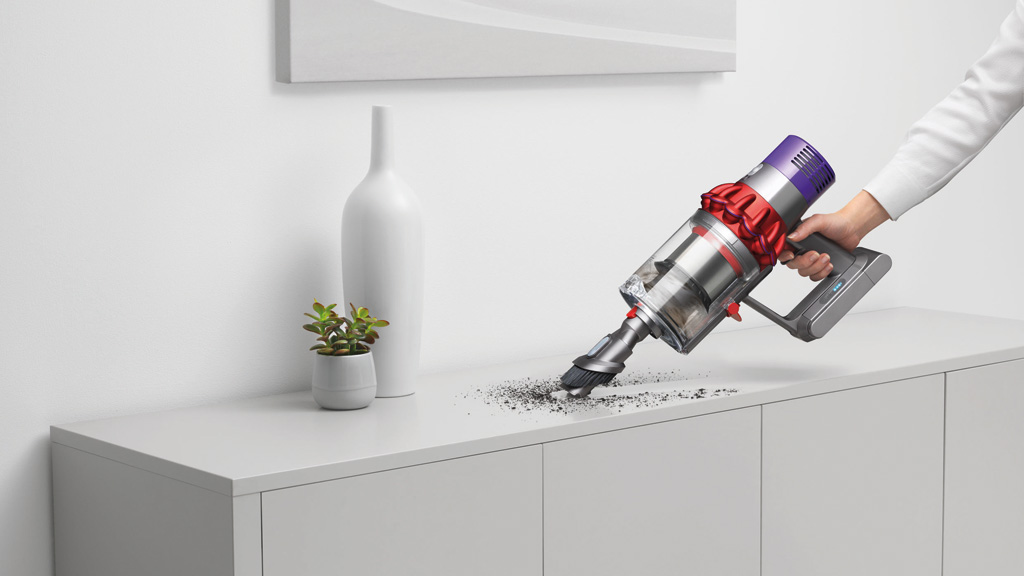 Thanks to its new digital motor and 14-cyclone array, the Dyson Cyclone V10 sucks big time. We don't mean that in a negative sense — that's actually a huge compliment in the vacuum world.

In the weeks we've had to put V10 through its paces, we've found it to perform incredibly well in pretty much every dry vacuuming scenario — with just a few exceptions. Thankfully, the Absolute+ model we tested had the attachment tools for every one of these scenarios.

The Direct Drive attachment is is the standard vacuum head that you'll likely get the most everyday use out of, though our favorite tool has to be the Soft Roller Cleaner Head, which is capable of picking up bigger pieces of debris like pet kibble, cereal, cat litter and more.

Other notable attachments include the Mini Motorized Tool, which is great for vacuuming on stairs or upholstery, the pointed Rigid Crevice Tool, which lets you vacuum deep into corners and crevices, and the Flexi Crevice Tool, which features and extendable hose. This one's particularly useful for when you want to vacuum inside confined spaces, like the interior of a car.

As is seemingly unavoidable with stick vacuums, we did experience a few blockages on occasion. We found that tissues and wrappers would frequently cause the V10 to jam up, with the only solution being the immediate removal of said obstruction.

You know that added power we were talking about earlier? We weren't kidding — the Dyson Cyclone V10 is as powerful as any corded vacuum the company has released so far.

There are three power settings available on the V10 — low, medium and maximum. Your usage of each will probably be governed by the surface (or stain) you're cleaning, and how much charge your unit is holding (which you can gauge on the LED indicator whenever it's in use).

Thankfully, the V10 has a much more energy-dense battery than its predecessors, meaning you can now vacuum continuously for up to 60 minutes on the lowest setting. That setting was also generally more than strong enough to lift any dirt we put in front of it.

Maximum power offers incredible suction (we put our fingers up to the vacuum head and were amazed by how strong it was – enough so that we'd firmly suggest not trying this at home), though unfortunately this setting will completely drain the battery after roughly five minutes of usage.

It's our opinion that the V10's medium power setting, which will give you around 30 minutes of continuous usage, is the one you'll be using most of the time, with the maximum setting reserved for small vacuuming sessions and those occasions where you have really stubborn dirt trapped in your carpet or rugs.

The Dyson Cyclone V10 is an incredible feat of engineering and design which makes almost every other stick vacuum on the market seem drastically inferior by comparison. Occasional blockage aside, this thing is a beast.

That said, such technological advancement comes with a hefty price tag, and it's likely that the V10 will be a tad too expensive for many potential buyers.

Still, this is the most advanced stick vacuum on the market by a good margin. If you're after a cord-free vacuum and won't settle for anything less than the best, look no further than the Dyson Cyclone V10.